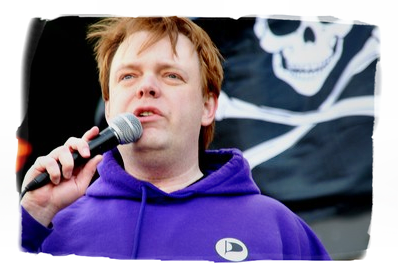 Thom Hartmann talks with Rick Falkvinge, Founder of Pirate Party movement. honored as Top Global Thinker / IT entrepreneur Website: http://falkvinge.net, about The Swedish Pirate Party and its influence in other European countries and the SOPA legislation.

Rick Falkvinge, the founder of the Swedish Pirate Party (the original Pirate Party) explains the problems with privacy current copyright laws create, the rise of a culture of sharing, and why we should have some hope for an open Internet.

Exclusive interview for Czech Position from Papa Pirate, the founder of the first Pirate Party. Rick came to Prague to speak about Bitcoin, a new virtual cash technology, but touched upon many interesting subject from Marx to monopoly in the conversation with Petr Matějček.

The polls came up on screen. The Pirate Party Berlin wins 8.9%. Rick Falkvinge, founder of the first Pirate Party (Sweden January 2006) gives a short speech to the german Pirates and the Pirates all over the world.

We sat down with Peter Sunde (middle), behind of The Pirate Bay and Rick Falkvinge (left), a founder of Piratpartiet, The Pirate Party of Sweden, we spoke about books because WE LOVE BOOKS! Books are going to digital format and book publishing as a b…

PPI Conference Friedrichshafen – Keynote „Why are you here?” – Rick Falkvinge

Flattr this! piraten.in Rick Falkvinges closing keynote „Why are you here?” at the PPI Conference March 13th 2011 in Friedrichshafen. CC-BY-SA Piraten-Streaming